Amsterdam: Wayfinding in the city of walking and cycling

Amsterdam wayfinding is in a growth period with clear objectives that include controlling the flow of millions of tourists around the pedestrian city centre. Like any city with similar goals it would benefit from a coordinated and consistent approach across authorities.

Amsterdam is world-renowned as a city of cyclists and pedestrians. 27 % of people cycle to work, and the upcoming car-free city centre is ideal for pedestrians as 5.7 million international visitors meander along its romantic network of canals. As in most modern cities, urban planners are looking at how to sustain controlled growth, manage the movement of crowds and reduce the use of cars.

A new Noord-Zuid metro line is the focus for the latest development to the city wayfinding strategy, as neighbourhood maps and 3D station plans are placed at 150 stations in Amsterdam. An intrecate network of fingerposts guide visitors around the pedestrian district with a lit section which comes to life after dark. A trial of digital signs display city maps at the Central station. 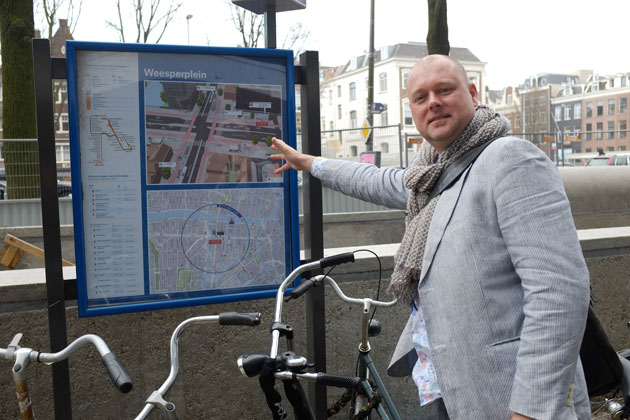 Arjan Honingh, wayfinding coordinator for the city, explained the vision for wayfinding. “Our main aim for visitors is to get them to stay longer and hopefully to come again. Many just come for the weekend and realise that there is more to do here than they expected.”

Wayfinding is used to manage the movement of millions of visitors, aiming to get tourists to their destinations (and off the crowded streets) as quickly and efficiently as possible, while interesting them in destinations dispursed from the centre. It is also a powerful tool for managing conflict between bikes, cars and pedestrians, as well as helping establish new commuter routes.

The original wayfinding strategy was based on a series of tourist walks. According to Arjan Honingh this didn’t work well as people cannot be expected to follow set walks. He has overseen an intrecate mesh of fingerposts pointing to tourist destinations from all directions up to a distance of 500m. Novel designs are being piloted which include a section which becomes illuminated after dark, changing the content of the sign to suit the opening hours of destinations. A modern approach on signs which, with golden text on a black background, have an heir of heritage befitting the city’s UNESCO World Heritage status. 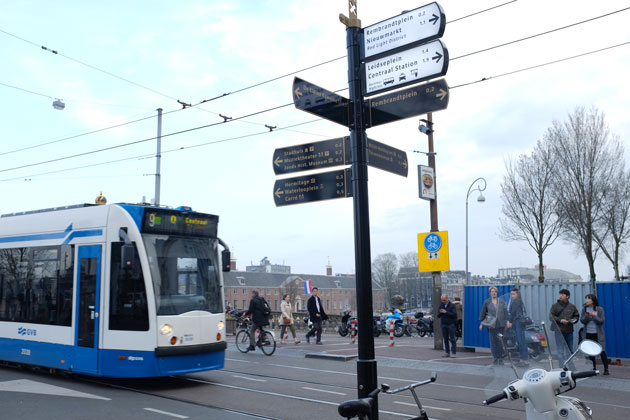 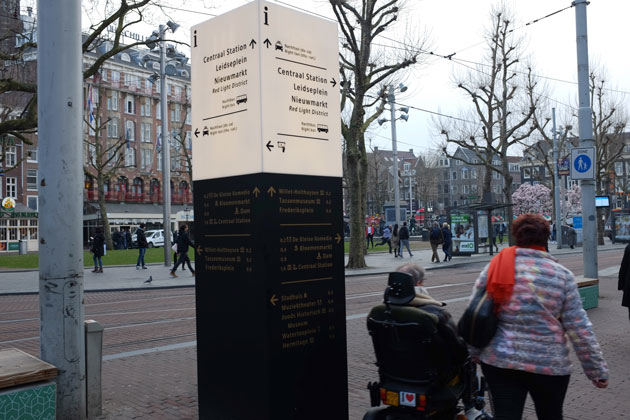 Sometimes these stylish signposts can appear a little low-key compared to the clutter of competing modern signage. Honingh is acutely aware of the need to minimise the number of posts and signage types. Private signs are strictly controlled in the canal area. Honingh regularly sets aside a week for driving round in a van taking down signs which are not authorised. 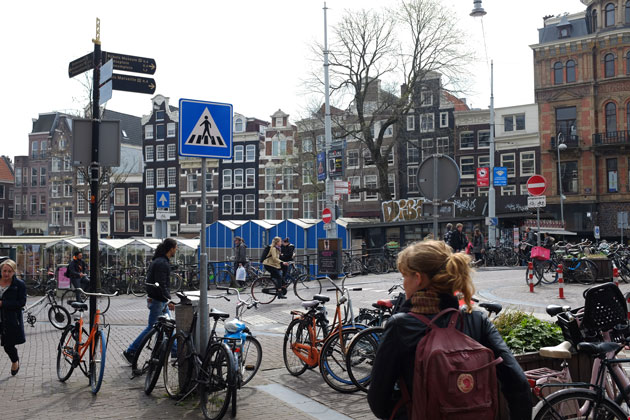 In addition to unapproved signs there are probably over 20 separate wayfinding systems, mainly out in the suburbs. Of the larger schemes there are three major authorities: the City Council, city public transport authority and regional transport authority, Viarregio. Each authority comes to an agreement, based on  effective consultation, where to place wayfinding information according to their priorities.

With signage clutter and different information types depending on what you are doing and where you are, Amsterdam could benefit from a single, coordinated, consistent design across all modes of transport. This could be designed as a seamless experience for the user, following a single city brand with sign placement coordinated to improve the user experience.

This challenge is familiar to most cities which have a division of power between city council, city transport and regional transport. A centralised approach requires a directive from a high, overarching authority with the will to set a clear vision for wayfinding across the city.