Best practice design for City Wayfinding information is now well established, with over 30 cities around the world following the same standards. Although the look and feel of each City Wayfinding basemap reflects the character of the city in a unique way, there are a number of common elements which unite them. 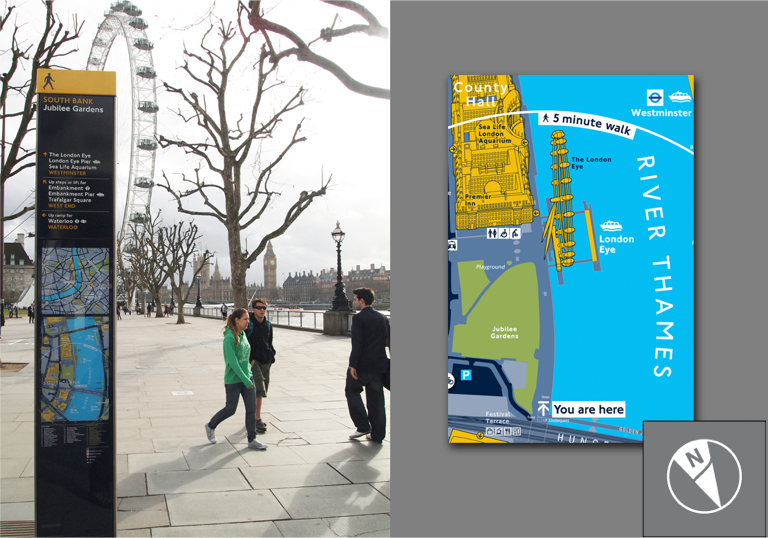 Heads-up mapping refers to maps that are rotated to the direction of view. While traditional maps face North, the pedestrian wayfinding sign helps orientation by showing features laying ahead of the sign at the top of the map. In the illustration above, the London Eye is shown visually on the map as a 3D building model. Looking beyond the sign in situ shows the real London Eye in the same field of view.

The pedestrian wayfinding map-based sign makes orientation even easier by showing directional pointers above the map (here, straight ahead to the London Eye). Rotating the map ensures that information shown on the map does not contradict these directional arrows.

Improving the legibility of a city makes people feel safer to explore and acts as a powerful encouragement to walking.

The Legible London database contains 750 landmark building models, many depicting world famous tourist destinations. These landmark buildings are modelled in 3D, making a very true-to-life visual impact on the maps. In contrast, New York’s WalkNYC Wayfinding system uses 2D wireframe diagrams. This makes sense as skyscrapers drawn to fit the building footprint would block so much of the basemap. 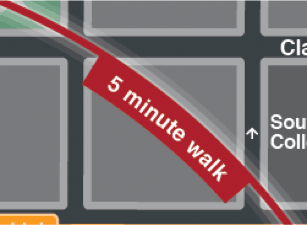 Wayfinding basemaps are intended to be very easy and quick to understand. Rather than expecting users to appreciate distance from a scale bar, an approximate 5 minute walk is shown in relation to the ‘You Are Here’ marker.

This is an effective way to show just how easy it would be to walk, dispelling misconceptions about distance. A study carried out by Transport for London showed that for 109 journeys between neighbouring Underground stations, the journey would have been quicker by walking above ground than using the tube (and so much more pleasant)! 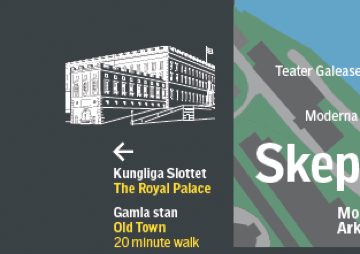 The map part of wayfinding signage tends to show a lot of detail over a limited area, often little more than a 5 minute walk. This is due to the amount of space available and the large scale of the map, but it also helps to avoid information overload.

Nearby places that are off-map are interesting as an aid to orientation as well as providing context or setting. Several methods are used, therefore, to point to places that are off-map, including large place names and arrows at the top of the sign, or illustrations with pointers in the margins (as seen on this Stockholm Wayfinding map).

An optimal scale has been arrived at for pedestrian wayfinding which comprises 2 maps with different levels of detail:
Detailed view
A scale of 1:1,000 – 1:2,500 allows enough detail to show features in the public realm which are of interest for walking, while covering the area equivalent to a 5 minute walk. Features include steps, fountains, statues, crossings and barriers to walking. Highlighting areas of interest such as parks, squares and pleasant walkways encourages users to explore on foot and to plan the most enjoyable walking routes.
Overview
1:10,000 scale provides an overview placing the detailed map in a broader context. Features which help orientation at a smaller scale include neighbouring area names, transport hubs and major topographic features e.g. rivers, railways and roads. 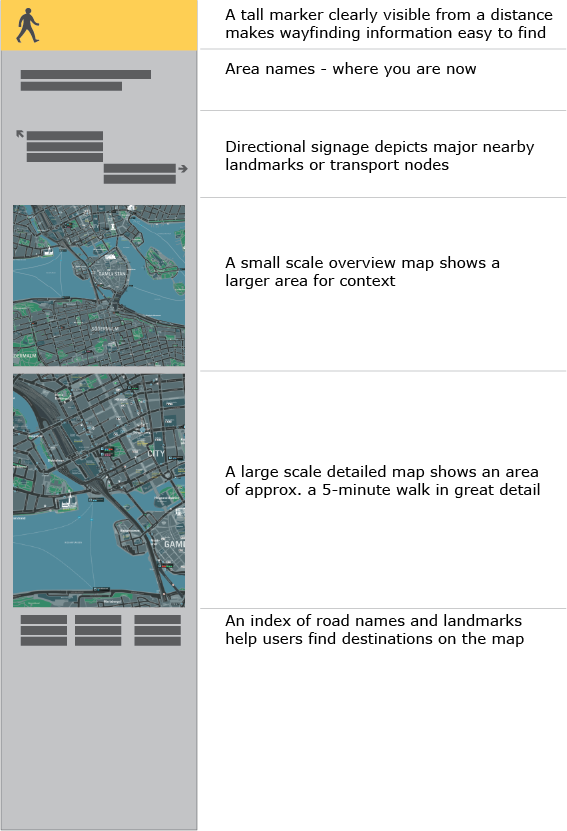 A series of pedestrian signage signs are placed at key decisions points in the direction of travel. The information on these signposts is designed to function at several levels and distances (described in the illustration above), disclosing more information the closer they are studied.

These elements of best practise have been chosen from our studies of over 30 City Wayfinding systems around the world. We have been privileged to have worked on some of the world’s best known systems. Our next series will look in detail at Legible London, as a celebration of its 10th anniversary as a wayfinding system.