Data for the cycling revolution 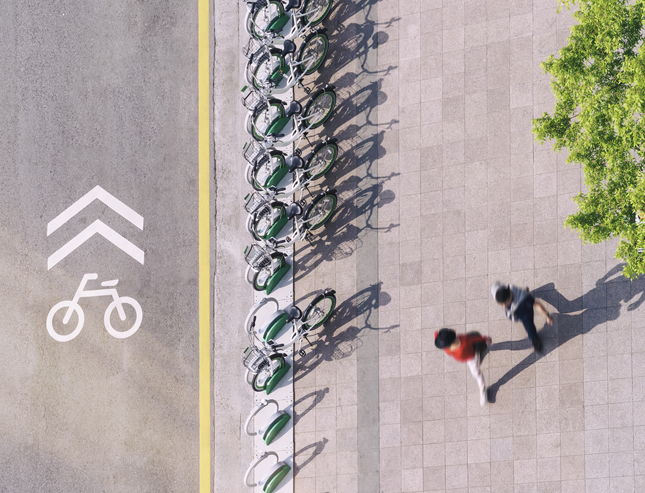 Olympic cycling champion Chris Boardman became Greater Manchester’s first Cycling and Walking Commissioner in July 2017. He and Mayor Andy Burnham are committed to ”building one of the world’s best cycling networks and creating a genuine culture for cycling and walking.” An essential component here will be the support of high quality cycle wayfinding, ensuring that the cycle network is accessible to all and not just those who have already been bitten by the two-wheeled bug.

The resulting cycling vision produced by Transport for Greater Manchester (TfGM) in 2017, Made to Move, focuses on improving road safety and engaging the public to bring about a culture-shift. In it, Chris Boardman proposes to establish a ten-year, £1.5 billion infrastructure fund for 700 miles of connected cycle corridors across Greater Manchester. 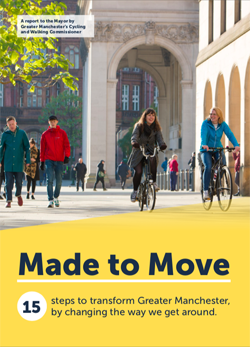 As well as improving infrastructure for cyclists, the fund will be integrated with current progammes and plans. TfGM intend to collaborate closely with local communities, businesses and schools in order to build support for their cycling strategy. Key will be clear communication of TfGM’s cycling goals, the nature of the new infrastructure being installed, and how they might encourage new cyclists to get on their bike.

The need for comprehensive cycle data

Tangible cycle wayfinding is best served by first building an information database – one that can grow as new infrastructure is installed, and that can serve a number of different needs:

A comprehensive system of cycle wayfinding will include more than just a small scale network overview or an online journey planner (see part 1). Influencing behaviour in people who would like to cycle, but need a supportive nudge, requires on-street signage at optimal positions, printed maps provided to schools and businesses, and online maps highlighting infrastructure improvements that make it safer to cycle.

A cycle information database can store all this data in a way that allows it to be output across a multitude of carefully designed and branded formats and channels.

Journey planning apps require cycle data in order to suggest route plans. Many authorities now provide open data for private app providers to use, as well as providing cycle journey planners of their own.

A cycle information database can compile, sort and make sense of complex data. This data must be relevant, maintained and tested against real life measurements. Experienced technical staff can manipulate the database to ensure that the open data provided is fit for purpose.

As one component of the cycle information database, a linear cycle network should be created containing advisory cycle routes. A long term infrastructure goal will be to join up fragmented segments to create continuous routes. This linear cycle network can be shared in relevant formats for collaboration across departments, which helps to increase engagement and remove siloed thinking.

The cycle information database should be designed and maintained by technical experts who can integrate relevant data into existing transport planning modelling systems.

Assessing the current cycle infrastructure in order to plan improvements requires a comprehensive visualisation of the current status. Often the variety of infrastructure in place can be complex and knowledge of it incomplete. A complete inventory may require a survey. A complete inventory should be compiled and stored in the information database, then visualised for reference purposes.

The database solution should marry the design and planning stage with the final implementation of infrastructure improvements and wayfinding products. It is also necessary to record assets for future maintenance. Assets information can be made available for enquiries about the cycle network, such as statistics for decision makers. 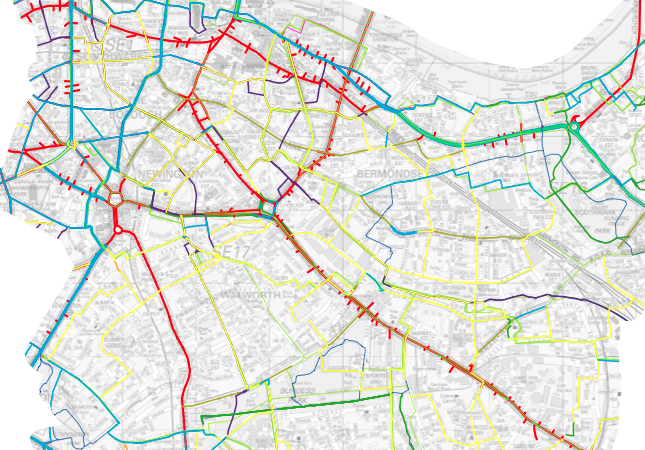 Cycling apps and communities have been collating data from actual cycle journeys for many years and there have been several attempts to join these datasets and serve them for journey planning purposes. Examples include: Sustrans National Cycle Network; Cycle streets; England Cycling Data project and Strava Metro.

In addition to an established network of recommended cycle routes, the city planning authorities can contribute knowledge about ongoing improvements, safe cycling strategies and planned infrastructure improvements in order to influence cyclists’ behaviour and present recommendations for safe routes. Systems should be set up to feedback information from local experts and stakeholders. This expert user input can then be stored in the information database.

In 2016 Transport for London (TfL) began a survey of all London cycle infrastructure. The pilot study, carried out in 2014 by T-Kartor, collated all available data, including:

The study also proposed ways to field survey 70 different types of infrastructure, from traffic calming measures to cycle parking and integrate, manage and maintain the asset as a core Cycle Infrastructure Database.

A core cycle information database is a powerful resource to facilitate planning, collaboration and public engagement. It also serves as a basis for informing the public, highlighting improvements for cycling and removing the barriers that prevent it.

TfGM’s Made to Move vision stated of its proposed 700 miles cycle network:
“The new, dedicated networks are to be distinctively branded and mapped, making them fun and easy to use, whether by bike or on foot.”