Don’t mention the ‘M’ word: System Maintenance and how to manage spending and retain the value in a wayfinding system

The ‘M’ word is not a welcome one for cities striving to secure a budget for wayfinding implementation and infrastructure. Maintenance also requires revenue costs, which are unpopular in times of austerity and more difficult to secure than capital investment.

However, city authorities which fail to plan, and budget for maintenance are kicking the can down the road. Maintenance is essential to preserve the reputation and integrity of wayfinding information, and can be the difference between a thriving system which grows over time in reputation and value, and one which fades into a symbol of disrepair and decay.

So what factors make system maintenance so important, and how can the risks be mitigated in a well planned system?

In order to visualise the escalating level of complexity as a system expands, take the following example from Piccadilly in London’s West End (Legible London Wayfinding). 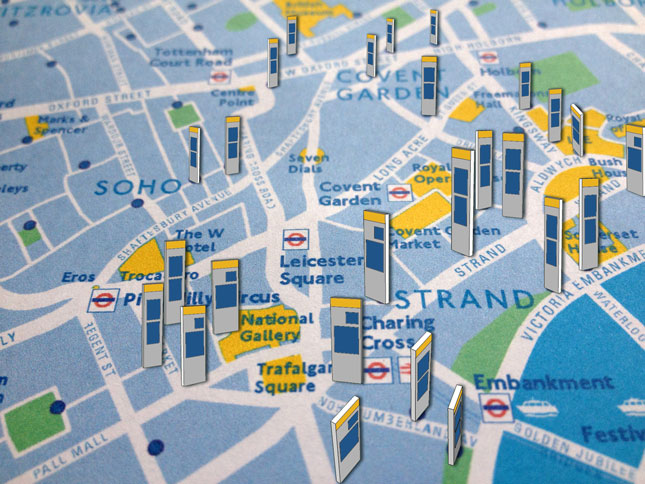 City Wayfinding systems begin with a wayfinding masterplan, a detailed description of visual identity and a design proposal for maps and infrastructure.

A number of pilots are carried out to test the design and content plan across a variety of areas. Evaluation surveys are carried out, and when evidence is accumulated to show user satisfaction, this paves the way for a broader rollout of the system.

Within no time at all, the number and density of information products, even in a much smaller system than Legible London, builds up a level of complexity as illustrated below.

Left: the number and density of wayfinding signs within a few streets of Piccadilly Circus (featuring the 3D Eros statue). Right: the coverage of these map products and their overlap.

The blue map frames show the number of signs featuring the Eros statue, depicted in different positions and at different rotations. Another way to visualise this follows below. The Eros statue appears differently on 85 Legible London totem maps (this illustration shows eight): 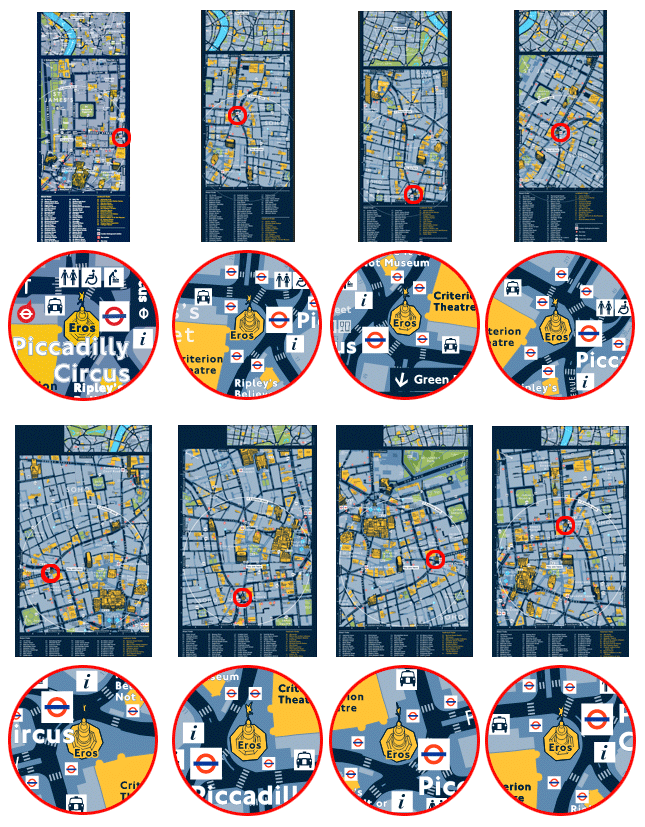 This complexity means that if an important change occurs to the basemap, e.g. if Piccadilly Circus station closes for major refurbishment, this change would urgently need to be reflected on 85 individual map products. This is just one basemap change of hundreds, even thousands.

Cities change at an incredible rate. Continuously. Many of these changes can have a significant effect on wayfinding and the accuracy of wayfinding maps. Some examples:

Imagine the effect of any one of these changes on wayfinding decisions or on people’s ability to understand and navigate the local area. Each change not reflected on wayfinding maps can lead to confusion, people getting lost, or a feeling that the maps are not accurate and cannot be trusted.

Is is essential that changes are reflected on the basemap as soon as possible, with associated updates to all relevant signs, retaining consistency between signs.

Wayfinding is like any other brand: trust is based on a feeling and needs to be earned.

In order to help our customers save money on wayfinding system maintenance, T-Kartor used our expertise in GIS analysis to devise new optimisation methods: Smart Updates.

It is obvious that the level of development across London is uneven, and that certain areas need more updating than others. However, closer analysis showed that while some map signs in the suburbs hardly change during a three year period, signs in the centre (e.g. close to re-developed Elizabeth Line stations), could face major changes on a monthly basis.

In addition, the types of infrastructural change have an unequal impact on the perceived accuracy of the map. The following basemap updates are ranked according to their impact on map users (high to low):

A major change such as a station closure should trigger an update of all maps on which that station is included (as public transport information is the highest priority information for TfL). In contrast, re-naming a landmark building need only be amended on the Master basemap for automatic inclusion in future map sign updates. 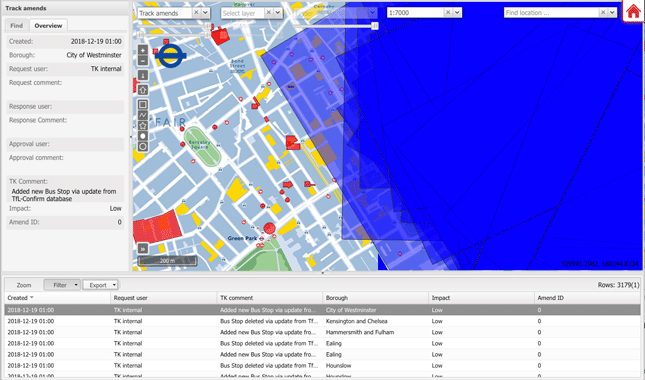 This open level of access to the system allows city authorities to make their own assumptions and analyses, planning the level of map product updates that best suits their budget.

Smart Updates enables the city to put available budgets to best use.

As part of a planned, controlled maintenance policy, the online management portal and Smart Updates routines allow city authorities to ensure a minimum level of mainenance to retain the value in their wayfinding system.