Gothia Cup is the world’s largest and most international youth football tournament. Each year around 1700 teams from 80 nations take part, playing 4500 games on 110 pitches. The logistics for the teams and staff seem to be a work of art. However, supporters following their children around 32 venues must work out for themselves how to get there. There is no official map. 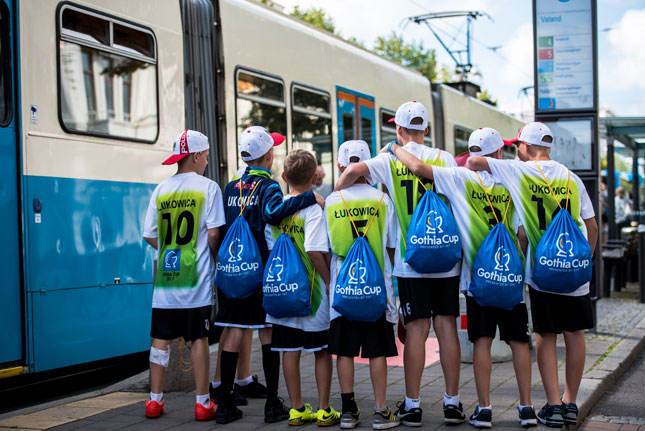 This team from Lukowica, Poland, is using the tram to get between match venues and their accommodation.

Getting around in Gothenburg is not straightforward. There are trams, buses and cycle hire to choose from, and the road network is laced with confusing interchanges (this year hampered by major roadworks). With 1700 teams in town for the cup, certain buses and trams are bursting at the seems with cheering, sweaty football teams. In the centre, some of the main venues are walkable, but many are spread much further afield and require transport.

My wife and I were in Gothenburg following our daughter’s team. The official Gothia Cup app gave us all the teams, games, goals scored, player names and venue names. To find the venues it linked to the phone map app. We looked up the venue name on Google maps and it’s travel app. This kind of works for most people, most of the time, but it takes some experience and is not problem free.

Apart from this the app didn’t feel like it was specific to the cup, so it didn’t feel updated and reliable and it was a missed opportunity.

Good city wayfinding for major sports events can ensure that the smooth running of the event continues off the pitches. This will improve the visitor experience by taking the stress out of travelling to and from matches, while improving knowledge about the surroundings. It will also benefit the local economy by encouraging visitors to see and do more. A detailed basemap around venues is required, integrated with accurate public transport information. An additional overview map of the city would put venues in context with tourist destinations, while highlighting other attractions the city has to offer.
Wayfinding for major events should include the following:

Follow this link for some inspiration from the London 2012 Olympic Games wayfinding.