Carl Wenczek of Born Digital designed and created the iconic 3D landmark buildings used on Legible London wayfinding maps. I visited his home studio to learn about what has become the defining project of his career.

Illustrating London’s famous landmarks as 3D buildings helps pedestrians create a mental map of their surroundings. They can clearly visualise and recall the layout of key features around them. Legible London’s 3D buildings are effective in several ways: 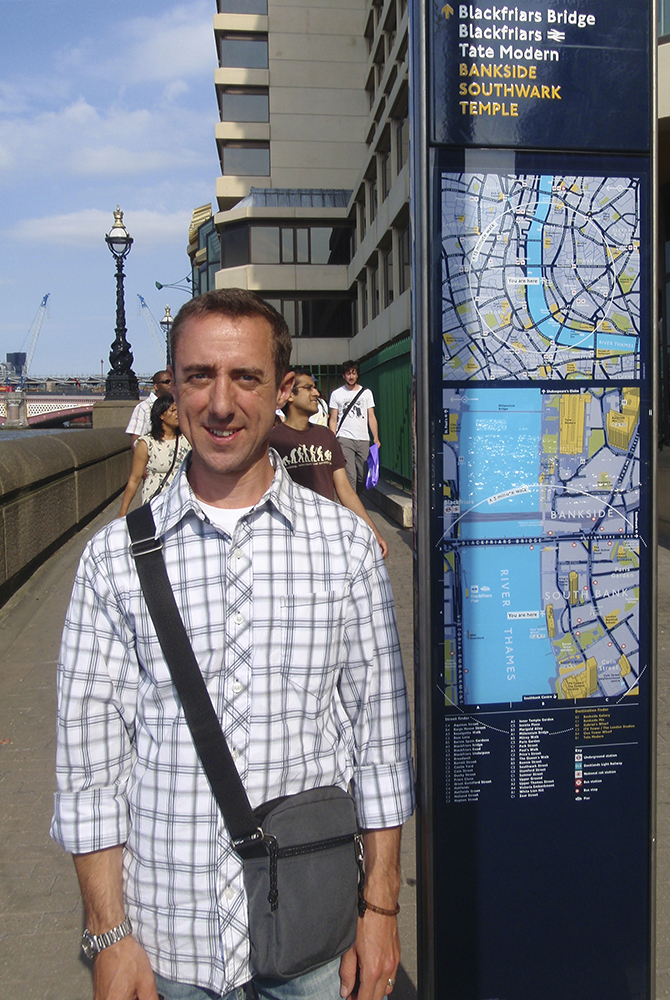 Carl Wenczek began work as an architect before specialising in digital 3D modelling. He is fascinated by how our cognitive recognition works, and the idea that remarkably few elements are needed for us to recognise an object.

“I think we are programmed to abstract and symbolise things in order to understand them. Some buildings are so iconic you know immediately where you are. This can be due to a key feature you remember, such as the sign at the top of the OXO building, or the awnings on the Harrods facade. It’s similar to Supernormal Stimulus and it’s something that fascinates me.”

He goes on to explain how this principle guides him in designing a model to be used at the Legible London scale.

“I start with a fully detailed building (see screen shot below) and peel away layer upon layer of detail, while leaving one or two key features by which the building is instantly recognisable. There is a skill to knowing which features to leave on, and how much detail will be visible once the map is printed.“

“My favourite buildings to model celebrate beautiful architecture such as the Houses of Parliament or St Paul’s Cathedral. I have also enjoyed modern icons such as the ArcelorMittal Orbit in the Olympic Park.”

Some of Carl Wenczek’s favourites

At first glance, the buildings used across London’s iconic basemap look so simple that they could be created in Google’s free 3D modelling software ‘Sketchup’. According to Wenczek this isn’t the case.

“Sketchup is for sketching in blocks, testing shadows etc. Not architectural visualisation. Printed maps require consistency, control and graphic rules.” He prefers to use 3DS Max, rendering fully detailed facades by tracing photography, then peeling back details until a simpler form remains. In this digital environment everything is produced at the same relative scale, and Wenczek can quickly produce test outputs to determine which details to leave out.

Each landmark building model will be seen on a myriad of overlapping maps across the capital. Wenczek rotates each building to match the angle of each map, carefully matching its building ’footprint’. The Legible London database is supported by an archive of over 700 landmark building models, helping millions of Londoners and visitors to create a mental map by which to navigate the city every day.

Carl Wenczek is proud to have worked on the world’s biggest wayfinding system and modelled its most famous buildings.

“If you can do one thing in your life that leaves a legacy, you feel fulfilled. Looking back it fulfilled your career. Legible London does that for me. A worthy project with millions of users. If I don’t achieve anything else of this magnitude, I’m happy. I’ve done my one thing.”