The future of digital wayfinding 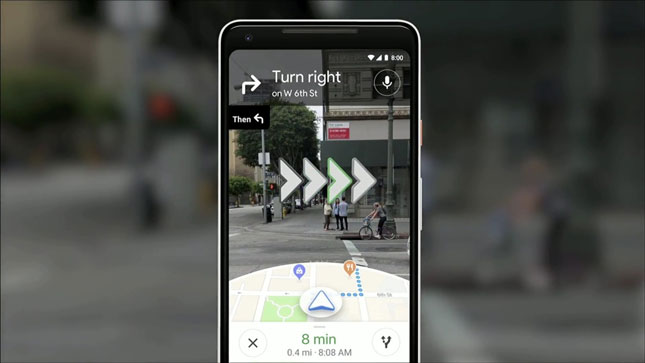 Google Maps is using AR (Augmented Reality) and AI (Artificial Intelligence) to test what may become the future of digital wayfinding. While the technology feels really ‘cool’ and futuristic, it also scares me as it points to a future where we might all be living in a vast computer game, interacting more with algorithms than people. Seeing things before they appear, evaluating them with automated help before we can experience them naturally. Ever get the eery feeling that you are being controlled?

To me, city wayfinding brings people together. It is ’social’ in a way that social media isn’t, by encouraging us to share public spaces and to travel collectively on public transport. A hierarchy of the placenames and landmarks most used by people helps us orientate ourselves, providing a larger context as well as revealing details. It encourages us to do our own thinking, exploring and decision-making, presenting a host of interesting options when we started out with just one destination in mind.

If ever you suspect you are being manipulated, look at the intentions behind whoever is paying. Google are an exciting company, pushing the realms of advancing technology. However, their business model is based on controlling all data in order to carry advertising everywhere, invading all our attention space to maximise revenue.

City wayfinding should be about providing information for the good of a city’s citizens. It is about presenting the city’s best side, positively shown with a strong nod to active and sustainable travel. Nudges for sure, but not to earn money, rather to improve lives in the long term.

Of course, money talks and there have always been business models where advertising revenue funds beneficial public information. But with digital forms of wayfinding, the dangers are greater as tech companies can develop much more complex business models which are opaque to city authorities.

The benefits of digital wayfinding

So what can digital wayfinding offer that extends the possibilities of traditional signs?

Can digital wayfinding be used to generate revenue?

Many cities are experimenting with the potential for advertising-sponsored wayfinding information. From 1980s-style station map posters, including a small map in a sea of advertisements to modern digital signage displaying wayfinding or transport information for 3 seconds then rotating advertising screens for 12 seconds.

However, cities which have invested in a wayfinding system tend to be more protective of the information brand. For this reason it is rarely permitted for companies to pay to include a logo on the map, and it is seen as unethical for companies to be permitted to buy a place on a map on which buildings are chosen as identifiable landmarks.

Less controversial may be to partner with a single sponsor in helping to fund the infrastructure itself – as an example, see the Cycle Hire scheme in London and TfL’s relationship for with Barclays, and then Santander. When the latter took over sponsorship a few years into the life of the scheme, TfL obliged by re-branding bikes and docking stations from Barclays blue to Santander red.

Likewise, the digital wayfinding developer must find innovative ways to open up revenue streams (and ultimately subsidise the cost of maintenance) without compromising the effectiveness of the mapping or directional information itself.

Few industry observers would say that the future of wayfinding will not have a digital component, with all its benefits and possibilities. The challenge will be to remain true to the original objectives of the city wayfinding system.