Wayfinding for the Olympic Games 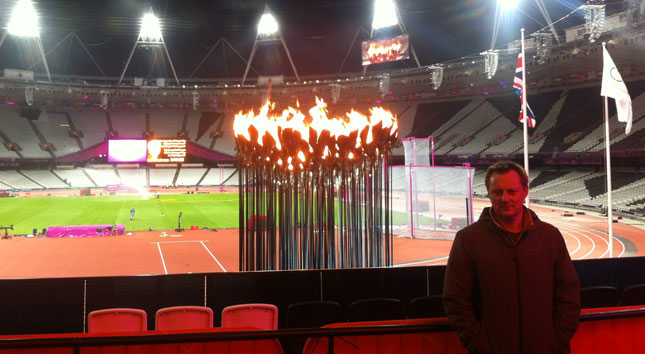 Geoff Holliday specialises in wayfinding for sports arenas: Wembley Stadium, Qatar 2022 World Cup and Tottenham Hotspur. In the build up to the London 2012 Olympics he was appointed Head of Wayfinding for the Olympics. Geoff believes that future Olympics and Paralympics can learn from how things were done in London.

It is said to be the biggest logistical challenge a country can face beside preparing for war. Hosting the Olympics, there is only one chance to get everything right, for the hosting country, for LOCOG, the organising committee, for Transport for London. There is no benchmarking to refer to as the country has never done this before in modern times. The success of the event would be judged not by the newspapers, or sporting legends expressing their delight from a podium, but by its visitors and spectators, on social media around the world.

Geoff Holliday had experience of creating wayfinding systems for the opening of huge stadiums (Wembley Stadium) and airports (new terminals at Heathrow and Dublin), but London 2012 was going to be like 40 huge events opening at the same time. 12 million ticketed visitors would be making their way to 40 venues, including some as far away as Glasgow and Newcastle in the North, Weymouth in the South, in addition there were media centres, hotels and four Athlete’s Village’s to take into account.

Wayfinding for events or cities

According to Geoff, venue wayfinding is about a ‘defined journey’, getting people to the right seat at the right time, using the transport options efficiently and the ‘last mile’ to the venue. It is designed by creating and end-to-end journey, that starts with a ticket and finishes with the return leg home.

City wayfinding is more about showing how a city is organised and giving people the tools to explore it. The wayfinding system for the Olympics was a combination of both of these disciplines on a grand scale. 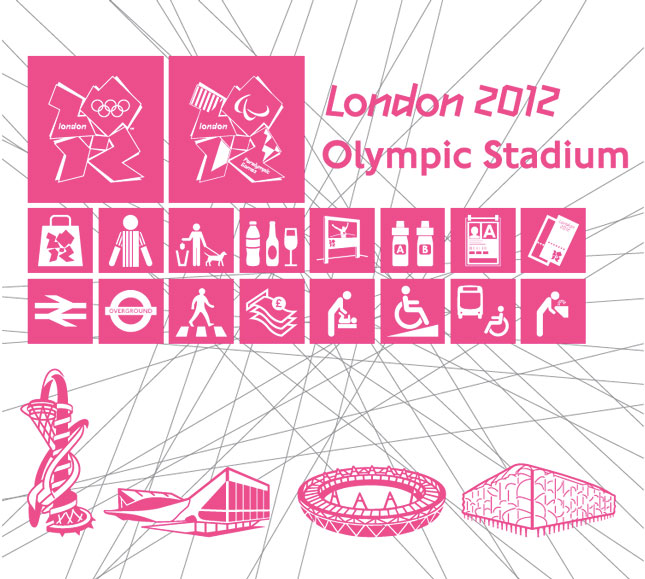 The strength of the wayfinding for London 2012 was in having a single, overarching system for the whole of the Olympics. Under the slogan One Look, One Way all the various delivery partners, including Heathrow Airport, TfL, National Rail, the Mayor’s office and host cities boroughs were brought together under one Wayfinding Masterplan.

The key to the success of the wayfinding was simplicity. London has a great design heritage, with many books written on the subject. For this city, designing fonts and symbols would be reinventing the wheel. The main ingredient to the system identity would be the magenta colour and making it work with existing graphic profiles, including TfL, Network Rail and Heathrow.

”We started with the Olympics colour palette, making the journey from Heathrow Airport to the Olympic Park in Stratford. There was blue, white and yellow signage but none had used the magenta from our games colour palette, so we knew we could own and control that one, and that it would stand out.” 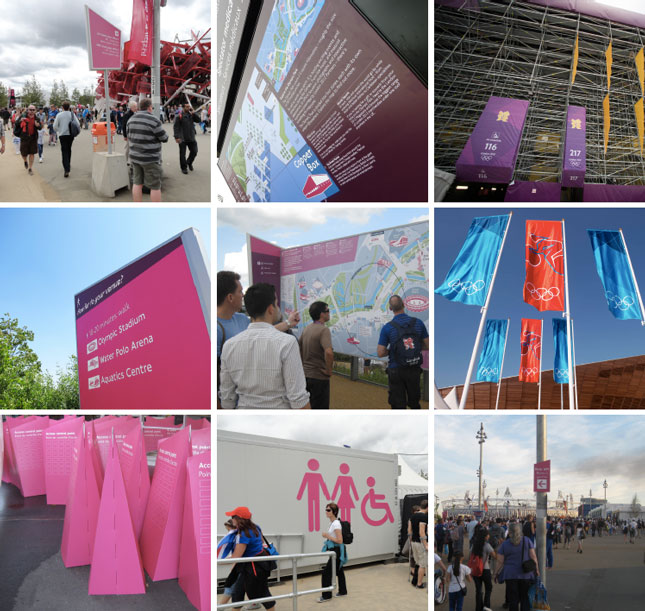 Rather than simply a system of signs, the Wayfinding Masterplan included tickets, maps, spectator guides, publications, last mile information and TfL transport guidance. One visual language would be used on absolutely everything connected with the Olympics, using local styles where necessary. The logistics of the event meant that a lot of London transport had to be ‘re-ordered’, for example using West Brompton underground station to leave after the volleyball tournament taking place at Earl’s Court. The temporary conditions would be communicated on tickets, spectator guides, route and network maps, as the well as the signage.

The rest is down to thoroughness when designing the major features of the system. No risks were taken on any piece of information. When designing 16m high magenta beacons for wayfinding, rather than trusting the handbook for text sizes and reading distances, huge signs were suspended from a bridge over the A12 at Canary Wharf and legibility tested on local passers-by. 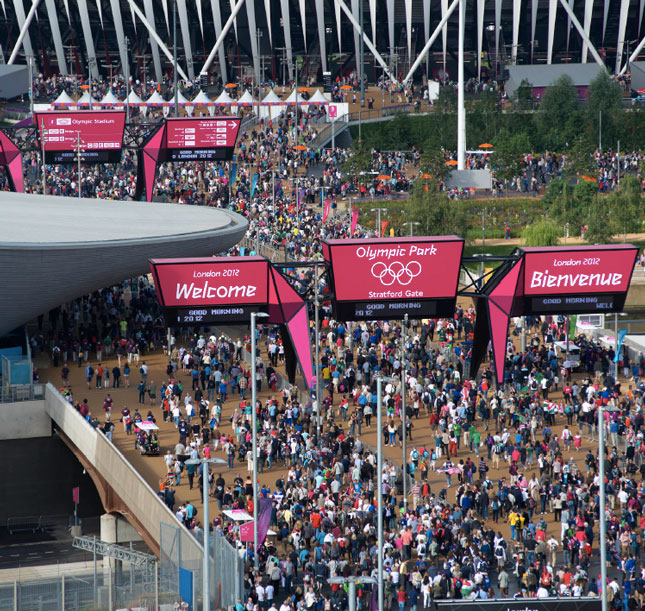 Stratford Gate gantry signs. A function-led design to landmark the gate and to assist major ingress, egress and changeover of spectator flows

Geoff and the rest of the LOCOG wayfinding team of designers knew of the Legible London wayfinding scheme, which had been helping visitors and locals to navigate around London since 2009. He was very pleased to learn that it would be rolled out to the full extent of Greater London in time for the Games.

”The presence of Legible London and access to it made wayfinding infinitely easier and infinitely better than if no mapping was in place for us to use. Mapping of this quality and detail for the whole of London takes years to build up. Without it we would have been struggling. We could use it in London but also adapt it for our own purposes. For maps of the Olympic Park, course maps or places outside of London we had a great foundation with Legible London.”

The Olympic Wayfinding team were already set on making use of existing systems and signage which worked. Legible London mapping was used on vast billboards around the venues, in visitor guides, at 70 ambassador pods (temporary tourist information booths) and on the Host City Map. It was no coincidence that the Olympics magenta branding complimented Legible London’s blue colour scale. 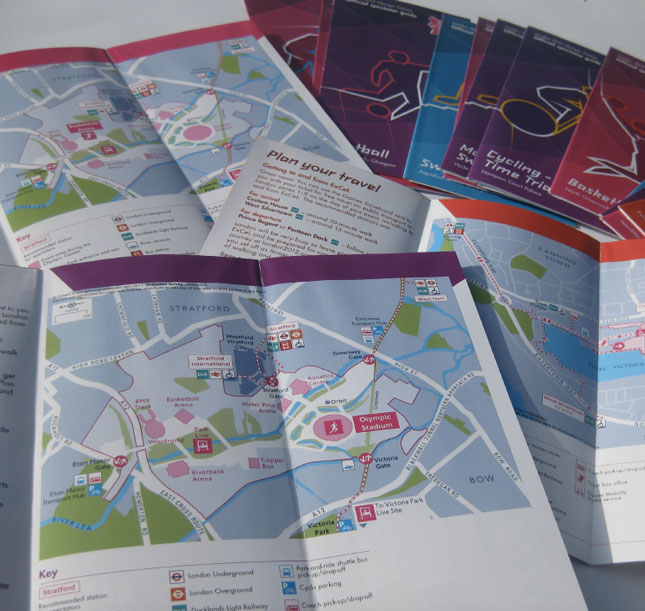 Spectator packs included a venue map, a last mile map, a course map for course and road events and a travel planning section

If Geoff were to sum up the most important advice he could give to future Olympics host cities it would be the following:

Geoff looks back on his time with London 2012 with enormous pride and satisfaction:

”You only get one chance to do something like this in your own country. We were aiming for an 80% visitor satisfaction rate and achieved 92%, so it can be seen as a great success. There was a lot of hard work and it was a steep learning curve

But would I do it again? Working 15-hour days, six days a week, you learn to ‘live’ the Olympics. Walking around the Olympic Park at 03:00 am with a torch wondering if some very big pieces of kit were going to work – Yes, of course I would. But only on my own terms.”