What’s in a (neighbourhood) name?

There is perhaps a widely-held belief that maps exist to reflect reality, to faithfully represent the places and spaces in which we go about our daily lives. We rely on their accuracy to show us the way if ever we are lost, and we put a great deal of trust in the information they offer. However, just as anyone who studies documentary film making quickly learns, the subjectivity of the author (or cartographer in this case) cannot help but form part of what they produce – no matter their intentions at the outset.
Google’s current dominance in digital mapping affords it a huge amount of authority, almost to the point that if it’s not named on Google Maps then it doesn’t really exist at all. Features that are easy to define, such as roads, public transit, individual business, historical landmarks etc rarely cause much controversy. Any errors in location or labelling on-map can be quickly spotted with concrete evidence presented for their correction. Where it gets tricky, though, is when the map attempts to define less tangible and more emotive content – and here we should consider the concept of the “neighbourhood”.
Neighbourhoods, by definition, are parts of a town or city where people live. They therefore become a key component to one’s own identity. The name any given neighbourhood adopts is rarely imposed from above, but instead arrived at through collective common usage and consensus. Neighbourhood names come to encapsulate, in an easily digestible chunk, what life may be like for those who live there. The neighbourhood name is its brand, and so at the mercy of those with a commercial stake in the area. When you marry this concept with the world’s most powerful search and mapping company, you get instances such as The East Cut in San Francisco, delivered unto the world via Google Maps, where the line between mapper, developer, and marketeer get more than a little blurred – with scant regard to the residents who had long presumed they were living in Rincon Hill. 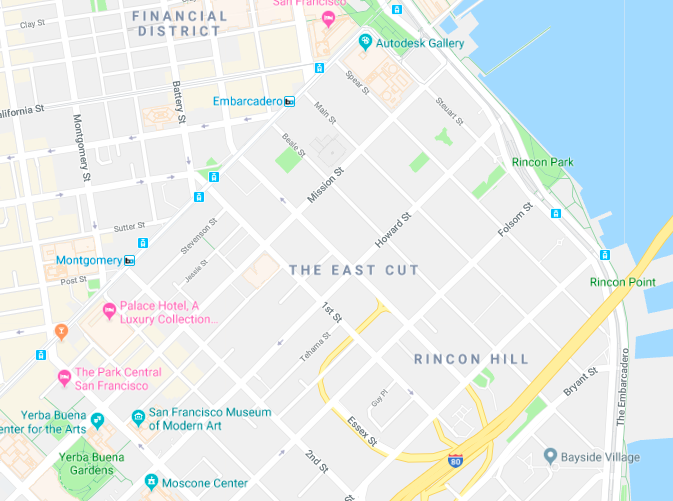 And a quick, er, Google suggests that this is only one of a number of instances of ‘invented’ neighbourhoods being given the rubber stamp of placement on a Google map. The Eye in Detroit exists in Google despite the name apparently stemming from a misinformed map published in 2003 by the Cityscape Detroit project. At least we presume that the Cityscape map contained an unintentional error, and not a cartographic trap laid to identify plagarism without due accreditation or licensing. Detroit seems a particularly rich source of disputed neighbourhood names, see also Midtown/Cass Corridor, and this discussion thread from the DetroitYES! forums. Does this all matter? Emphatically yes, according to Detroit city planner Timothy Boscarino.
To some extent, Google’s actions are understandable. Like most who seek to map our world, unnamed or ill-defined areas on a map create an uneasy void. This is doubly the case for Google, who monetise (incredibly successfully) the content of their map through their search and advertising business model. And as cartographers, they are not alone in facing pressure (whether internal or external) to have their map reflect the interests of a stakeholder – an example closer to home for me, Legible London, adopted the village name of “Fitzrovia” within the City of Westminster even though you would have had a hard time locating it on any other map of the capital. A similar request from a ’business improvement district’ to christen another part of the city as “Midtown” was rejected, however.
Problems clearly do arise when such commercial aims can so easily override the wishes of the people who are being “mapped”. So, for those feeling aggrieved, what can be done? Well, as digital mapping moves it way from our phones and into our cars a whole raft of companies are aiming to challenge Google’s currently unassailed position at the top of the cartographic tree. At a more grassroots level, projects such as Open Street Map allow for a more democratic approach to creating content for mapping. And even Google themselves permit (if not exactly openly encourage) policing of their map via this page.
For most of us, the best advice seems to be to simply adjust our critical filters and apply a little more scepticism to how the world around us is represented in the digital realm. Just because it is on the map, that shouldn’t supplant the evidence sourced through our own eyes and experiences.