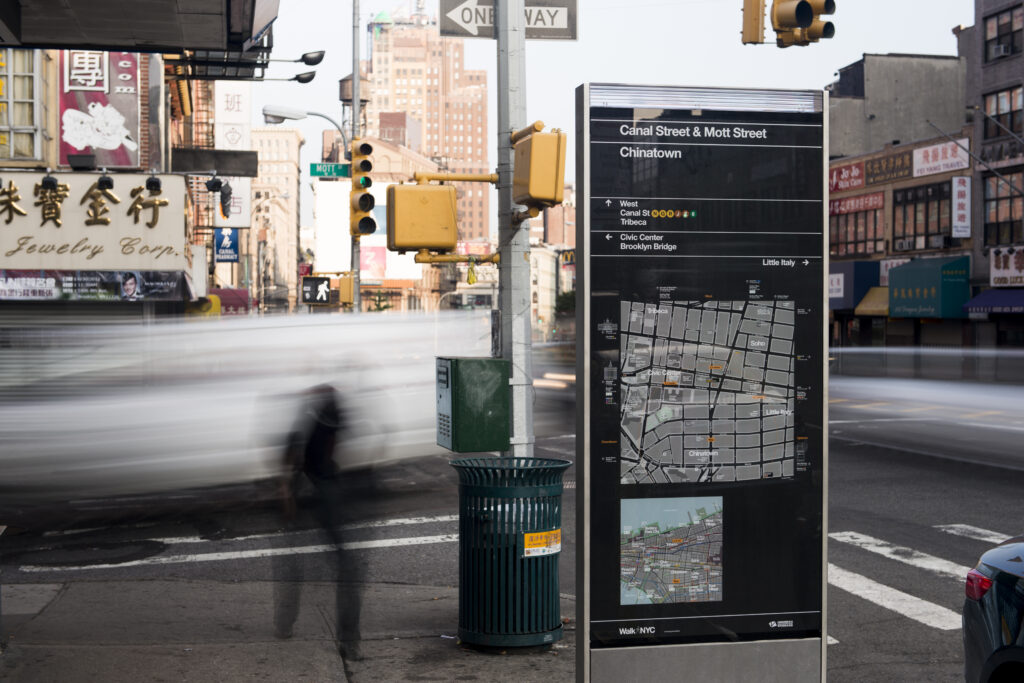 New York City Department of Transport (DOT) wished to remedy the information and navigation gap as pedestrian oriented information was difficult to find, and inconsistent where available. 33% of people surveyed didn’t know which way was North, making navigation difficult when emerging from a subway, and 13% of locals were not aware of which neighbourhood or borough they were in.

WalkNYC wayfinding system provides a clear visual language which encourages walking and transit use by providing quality multimodal information, consistent across a broad range of environments in the city. A key principle of WalkNYC from the start, was inclusivity, so  the system was launched across all five boroughs, rather than just heavily visited Manhattan.

The system was designed by design agency Pentagram to feel like a natural extension to the subway as visitors are already used to its strong graphic style. Wireframe landmark buildings are used to accommodate skyscrapers on the map and sign infrastructure echoes the steel and glass structures of downtown Manhattan.

T-Kartor created a seamless basemap for all five boroughs of NYC including a light base for printed products (often viewed indoors under lower lighting levels) and a dark base using high contrast for on-street signs. Cycle and transit data were integrated and aligned to the underlying basemap according to rigorous graphic specifications. The regularly updated basemap is the core allowing T-Kartor’s platform to output over a thousand products of diverse types.

An early embracer of the wayfinding basemap was CitiBike, which used the maps on bikeshare docking stations to show the whereabouts of other docking stations and highlight nearby cycle routes and infrastructure.

New York MTA (Metropolitan Transportation Authority) adopted the wayfinding basemap to show vicinity maps with public transit links at over 450 subway stations across its network. In a creative adaptation of the basemap a mural was created to adorn subway exit walls at several stations. The MTA were also early adopters of digital wayfinding, using a customised version of the WalkNYC basemap in digital screens to be rolled out across all stations.

Our data driven basemap is especially flexible with regard to different outputs and formats, unleashing creative possibilities which can benefit many sectors of the city. The Building Healthy Communities initiative in 2016/7 were provided with folded maps to improve physical activity and engagement in public space in East Harlem, South Bronx and Brownsville. The maps highlighted farmers markets, community gardens, urban farms and community art.

“Thank you the entire T-Kartor team for your professionalism, excellent communication, and quality products” 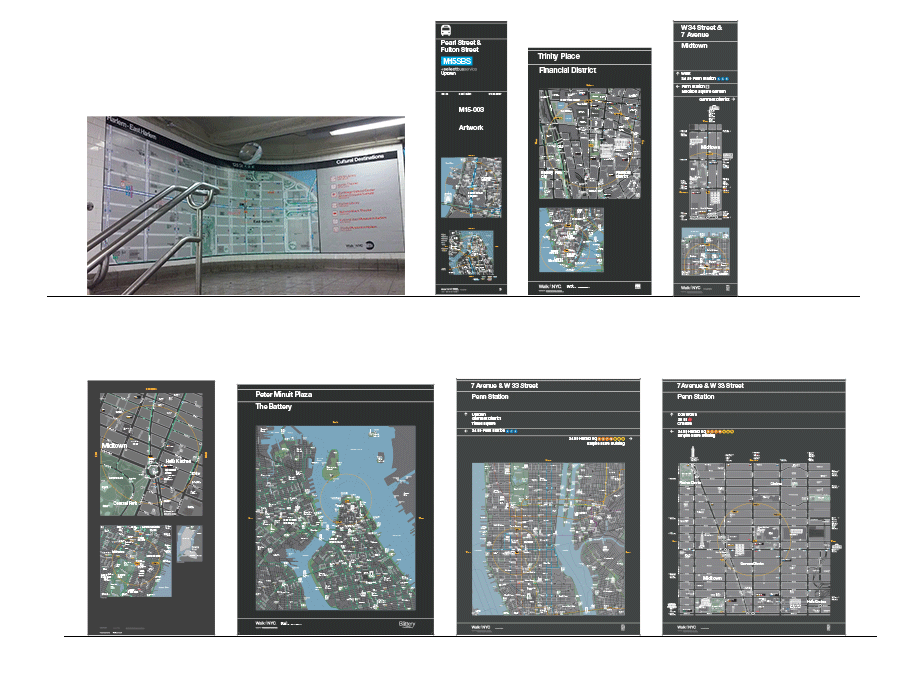