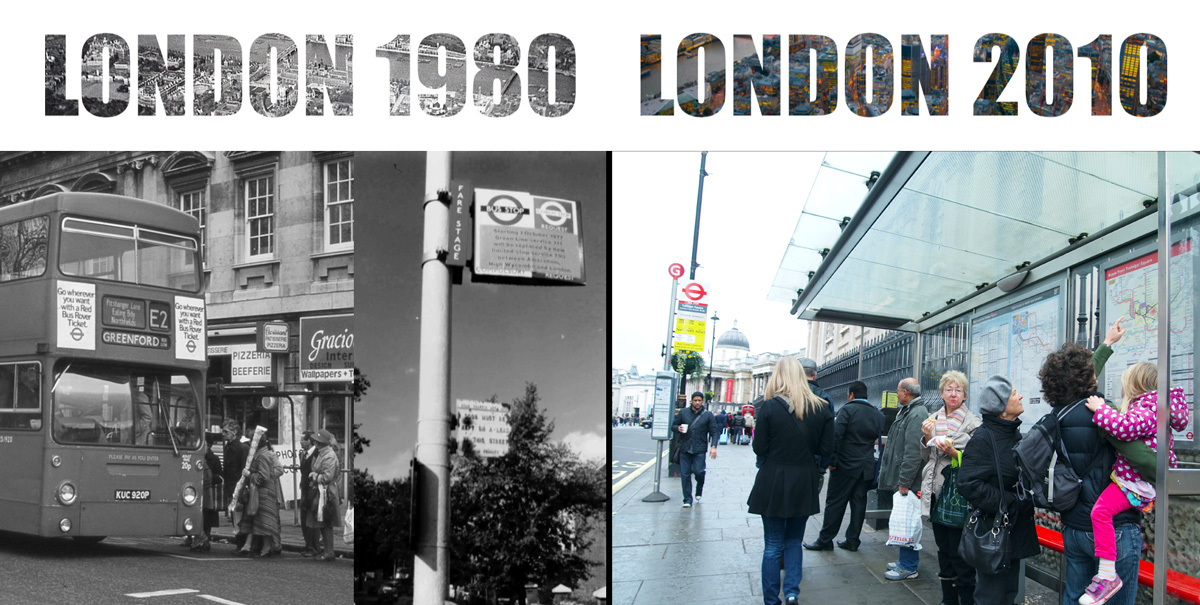 A tube map and a bus timetable. That was all you had to navigate in 1980’s London. The problem was that you had no way of knowing that the distance between Leicester Square and Covent Garden, two neighbouring stations on the Piccadilly line, are a very pleasant 10 minute walk apart. In fact you would probably have walked further than that underground!
(See this tube map with actual walk times). 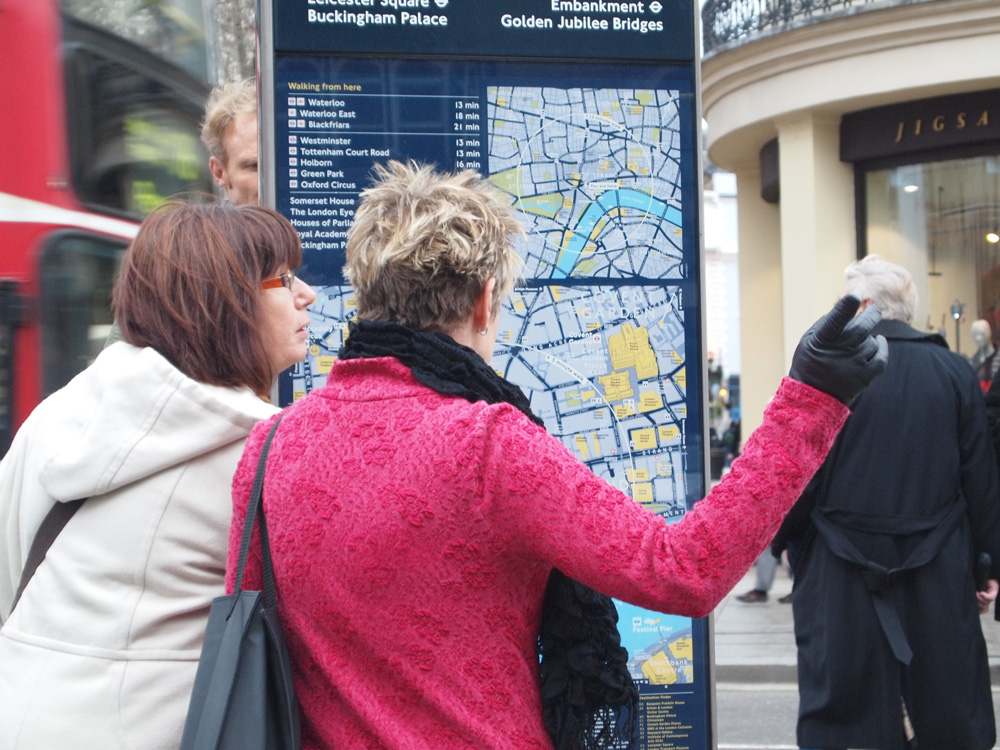 Legible London is a vast achievement with over 10,000 unique maps regularly updated around Greater London from the same iconic basemap. The familiar legible map design, associated with quality and accuracy, is used consistently across all modes of transport served by Transport for London (TfL).

Legible London has inspired over 30 cities around the world to design similar wayfinding maps (this blog will study many of these) and remains an important case study for cities interested in implementing their own wayfinding system. Here are some of the success factors and growth stages of Legible London:

A new governance structure in 2000 saw a directly elected Mayor of London, with responsibility for transport policy, delivered by the new functional body Transport for London. This consolidation of management has had a major beneficial effect on transport policies, including walking and cycling.

At the same time sustainability issues such as environment, health and congestion were causing cities around the world to actively promote walking as a mode of transport. Walking as an important theme of policy development during the five years leading up Legible London can be seen in a large number of official reports from that time:
Streets for All: A guide to the management of London’s streets, 2000
Produced by the Historic Buildings and Monuments Commission for England, this is a guide to the management of London’s streets.

Economic Benefits of Good Walking Environments, 2003
A study commissioned by the Central London Partnership to demonstrate the economic benefits of walking and public realm improvements for businesses in London.

Making London a walkable city, 2004
A Walking Plan for London from the Mayor of London

One of the reports which was most influential to Legible London was a study in 2004 by Gehl Architects: Towards a fine city for people. Public spaces and public life.
The report analysed London’s traffic, pedestrian and cycling environments, looking carefully at pedestrian activities. It studied ways of getting around including footway interruptions, crossings, underpasses; sitting in the city and aesthetics such as shop frontages and pleasant green areas. Gehl concluded that London suffered from a domination of vehicular traffic at the expense of pedestrians and cyclists. It recommended:

Gehl’s report was well received by the Mayor’s office, inspiring more research on pedestrian wayfinding. “This study gives us all the confidence to build on our city’s many outstanding and unique qualities to create a network of better places and ultimately to make London a more livable city” – Richard Rogers, Chief Advisor to the Mayor

Another study in 2006 by AIG set out a case for wayfinding signage:“Walking can lead to major benefits for the transport system, economy and public health. Predictable, consistent and authoritative public information is the key to building pedestrians’ confidence.”

This report also found that the many pedestrian signage systems in central London are incoherent and often confusing. Causing people to rely on the Tube map to find their way around above ground.

With sound business case generated for Legible London two subsequent pilots were commissioned around Bond Street, 2007, and Richmond, Covent Garden and the South Bank, 2009-11. The findings from these pilots were very encouraging indeed:

Once a full roll-out was decided upon T-Kartor was commissioned to develop a city-wide mapping database following the specification of the pilot maps. This constantly maintained basemap would be the core of a system used to create all Legible London products in the future – a number which has exceeded 20,000 maps! 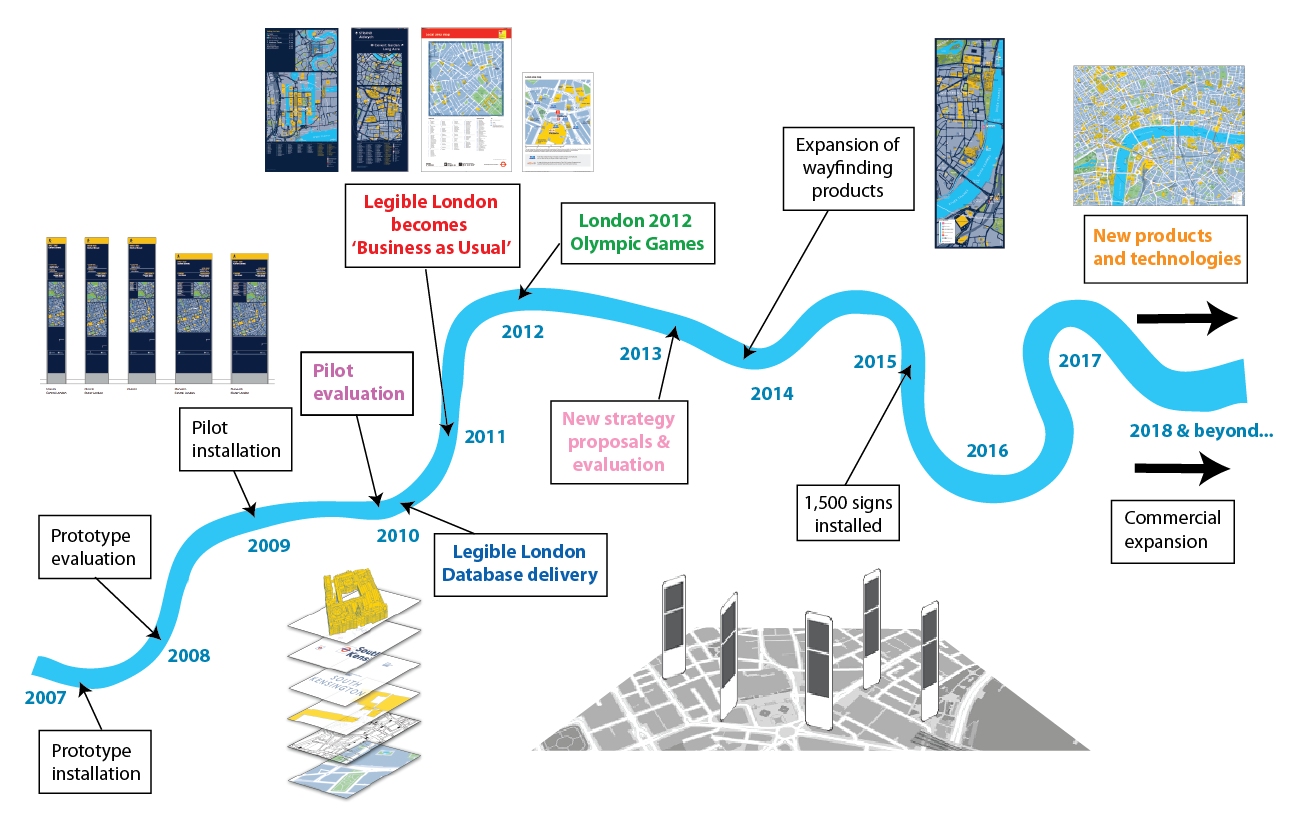 ••• Pilot evaluation
The pilot consultation project took over two years including: developing naming conventions, stakeholder workshops, place naming research, content selection procedures, design and user testing.
••• Legible London Database delivery
The basemap was created in stages focussing on areas of greatest need for map products. The first deadline was the introduction of TfL Cycle Hire in June 2010, with the full extent of Greater London created in time for the London 2012 Olympic Games.
••• Legible London becomes ‘Business as Usual’
‘Business as Usual’ refers to the vast quantity of regular information products regularly updated by TfL at bus stops, stations and interchanges. With the completion of the wayfinding basemap, Legible London mapping replaced all other maps as the official TfL style of map information.
••• London 2012 Olympic Games
Legible London was used for a vast amount of special wayfinding information to help 5 million extra visitors navigate around London during the Games. This included tear-off map sheets centred on 70 temporary information centres, station hot-spot diversion maps and 5m copies of the official Host City map.
••• New strategy proposals and evaluation
An evaluation was carried out during 2013 by Steer Davies Gleave to measure sign usage, understand the impact of Legible London on wayfinding and understand the helpfulness of Legible London to users. The results of this research provided an evidence base to further develop the coverage of Legible London across the capital.
••• New products and technologies & commercial expansion
TfL has made consistent efforts to invest and develop the value of Legible London. This investment includes maintenance and growth of the basemap e.g. to cover new developments such as the Elizabeth Line. Several pilots have been carried out to trial digital or interactive information products. Current research into the future of digital wayfinding proposes that while mobile and online planning tools are fundamentally changing wayfinding, there is no major demand to overhaul and digitise map assets. This is because of Legible London’s status as valued and trusted information and the power of the mental map created by ‘heads-up’ mapping.

The value in supporting Legible London as a living and breathing system is exemplified by way it continues to attract investment. This funding allows for continuous maintenance of the basemap, expansion of the scheme into new town centres across London, and development of new LL products including studies in digital executions.