Maps and the City 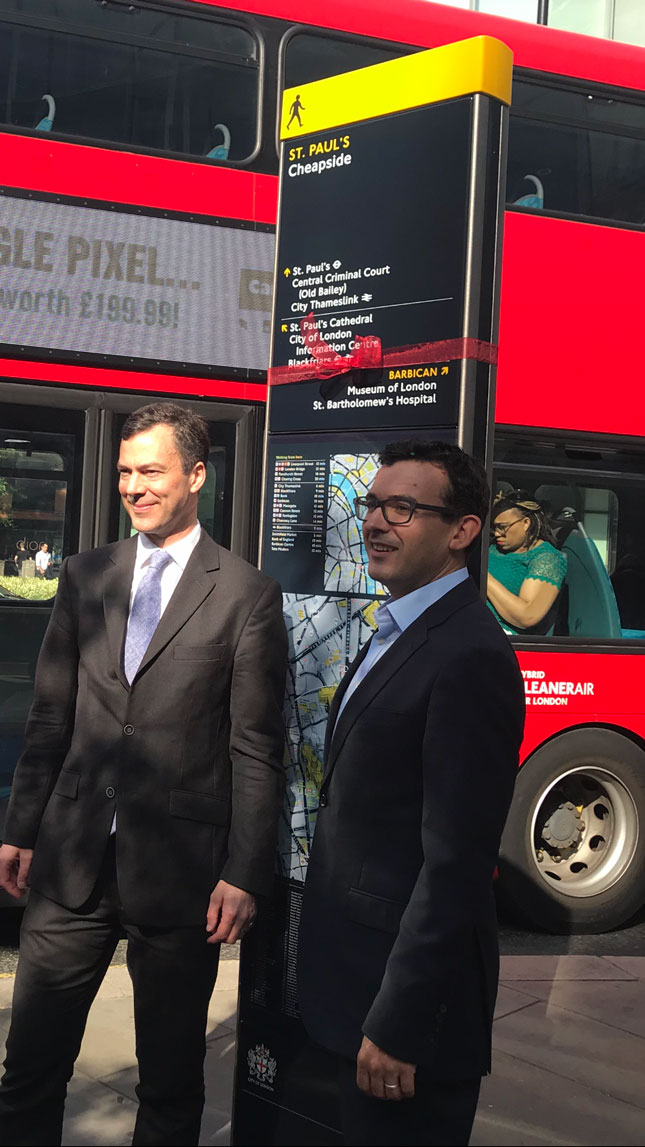 The Legible London city wayfinding system may be ubiquitous in many parts of the capital, but there has always been one noticeable gap thus far devoid of the iconic bright yellow and dark blue signs – the City of London itself.

Until now that is. Last Friday, Will Norman (London Cycling and Walking Commissioner) and Alastair Moss (Chair of the City of London’s Planning & Transportation Committee) cut the ribbon on one of 200 new Legible London (LL) signs currently being rolled out across the Square Mile.

Over the coming months, dozens of LL directional panels and signs – mono-, midi- and mini- ‘-liths’ – will be installed to aid pedestrian wayfinding in the City. They will be fully integrated into Transport for London’s (TfL) existing arrangements for maintaining not just their physical upkeep but also the content of the maps they utilise.

The City of London’s stakeholders have been given the opportunity to review the LL basemap using the ‘Llama’ online web portal. Developed and maintained by T-Kartor for TfL, Llama allows local experts to view and comment on any feature shown on the LL basemap and trigger updates before signs are sent for artworking and manufacture. Not only does this mean that very recent (and even near future) changes to the public realm can be captured, it also ensures accuracy and consistency across the full suite of LL products covering that particular area. All basemap amends requested using Llama are reflected in T-Kartor’s central mapping database that feeds each and every one of the thousands of existing LL products.

This approach is already bearing fruit. For example, the on-map representation of the famous ‘High Walks’ system around the Barbican area has been improved, highlighting their significance for pedestrian movement in this part of the City.

Also, stakeholder input has lead to the re-classification of the area name ‘Guildhall’ – from a ‘village’ to a ‘neighbourhood’ – to better fit within LL’s well established information hierarchy. LL makes use of the concept of ‘villages’ to define place, and they form an essential component in ‘addressing’ each LL sign.

The City’s legacy wayfinding system was reviewed in 2017 by consultants Applied, who found a number of shortcomings with the approximately 70 signs and 150 fingerposts the City had been using up until that point. Fashioned out of vitreous enamel, the old signs were solid in build but excessively costly to update. 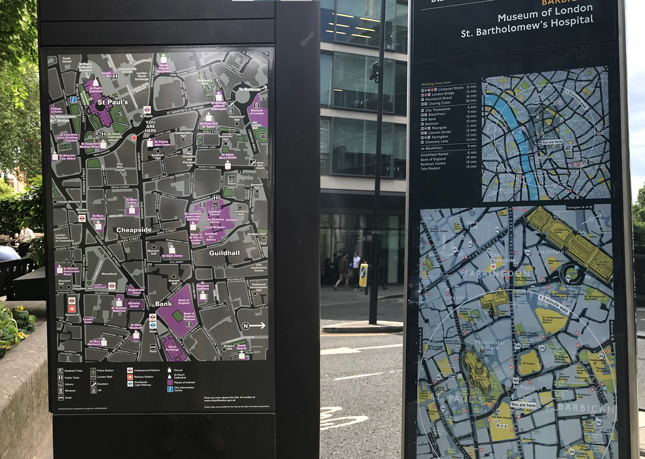 Their placement lacked a coherent strategy, and the maps they used were often at odds not only with the LL signs installed in neighbouring boroughs (some of which, in the case of both Tower Hamlets and the City of Westminster, were mere feet from the City boundary), but also often lagged behind other LL-derived maps already to be found within City jurisdiction at Tube stations, bus stops and Cycle Hire docking stations.

The 2017 review also highlighted potential areas for improvement to the current LL design, with the goal of moving the ‘mono sensory’ nature of this wayfinding system towards one truly ‘accessible to all’.

Practical recommendations included consideration of tactile, raised surfaces; audible information; LEDs and other illumination. If adopted, the compact nature of the City of London could lend itself naturally to studying the effectiveness of such measures. Far from being the last one to the party, the City may find itself spearheading the next wave of LL development.

But that may yet be to come. For now, tourists and regulars alike are being better supported by the City of London and TfL as they navigate on foot.