Walk21, The movement for walkability in cities

Walking is healthy, free, enjoyable, it frees up space on public transport, and it’s for everyone. Jim Walker has spent 20 years building a movement for walking, based on his pioneering work in London at the turn of the century. Jim started Walk21, the only international conference about walking, in 2000 to promote walking for the 21st century. This year the event in Bogota attracted nearly 5000 participants. 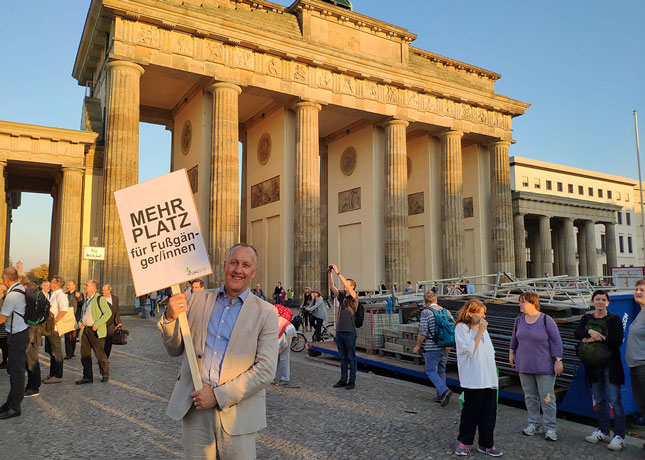 Walk21 was the result of a dissemination event following £1M of EU funding spent on 22 projects to study walking investement strategies. Jim Walker was, at the time, head of the London Walking Forum, which was set up in 1997 in response to a trending decline in walking in cities. The event was such a success, Jim decided to start Walk21 as an annual conference to spread this shared knowledge.

How can Walk21 help reverse a global trend and make walking popular again? According to Jim Walker there are lots of guidance and strategies available such as Vision Zero’s steer to make walking safer; TfL’s Wayfinding Guidance helping make cities more navigable; and the Global Design Guide by Bloomberg setting more inclusive standards. However, cities are getting stuck on how to use these documents to achieve their goals. For example, some are investing in ‘solutions’ to problems that aren’t there, such as installing complete street environments in areas where there is little demand or benefit.

While walking infrastructure is highly visible and simple to plan or add retrospectively, it is often policy stumbling blocks that limit walking, such as a lack of appropriate measurements. Walking is typically measured negatively in terms of road deaths and serious injuries. These figures would paradoxically be reduced by walking less not more! This way of measuring walking, therefore, does not fit well with a long term solution.

Jim Walker and Walk21 have spent 20 years networking between cities and studying their policy best practise and effects. They advocate planning at a human scale, which means focusing on equity and democracy, safety and kindness, happiness and nature, economic competitiveness and engagement; put simply: making walking safer, easier and nicer. This requires a multi-disciplinary approach and often a facilitator to help find the common agenda. 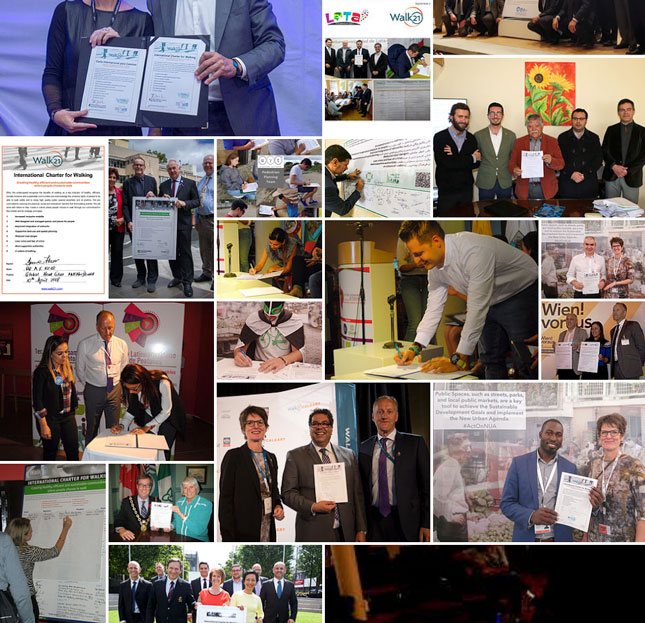 Walk21 asks cities to sign the International Charter for Walking

Some of the best success stories with the most visible transformations are noticed in cities which have been working with a consistent approach for the longest. For example, the Walk21 event in Portland, Oregon during 2003 was attended by the US Surgeon General, recognising the value of walking to health. America Walks, the small walking advocacy group who inspired the event, is now active in every state across USA.

The 2002 event in San Sebastian ‘Donostia’ benefited from its Mayor also being Chairman of the European Mayors forum at the time. This encouraged many politicians from across Europe to attend the Walk21 event  and sparked interest in walking issues across Europe. After 16 yrs of investment in good walking policy the city has really transformed to benefit people of all ages, improving their ability to walk around. To Jim Walker San Sebastian ‘Donostia’ have done many things right and it is a real joy to walk around and see people benefit from the Walk21 vision for a walkable city.

More recently The Mayor of Bogota, home of the latest conference in 2018, has also been improving walking in the city. His progressive and often disruptive style has seen a heavy investment in public transport and cycling. He now also talks of the importance of judging a city by how many people are walking, including the quality of their experience. In a city where fewer than 20% own a car, he is getting the public space working for the community. Interestingly he observed a design standard which is making Vienna one of the most walkable cities in the world – a consistent 2m minimum pavement width – and decided that in Bogota he would advocate for 12m! 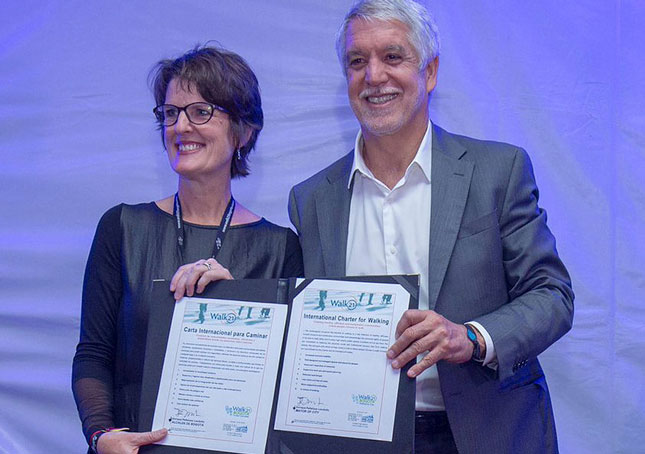 Bronwen Thornton and Enrique Penalosa the Mayor of Bogota, who is one of more than 500 Mayors who has signed the International Charter for Walking

Jim Walker stresses the importance of getting the basics right with city planning – investing in the needs of people – rather than assuming there is always going to be a technological solution. Investment in autonomous vehicles and electric cars forgets the fact that we all walk at some time and we need to focus more on improving the quality of walking not just the quantity.

Walk21 has a commitment to support 100,000km of new footpaths in cities around the world to help pedestrians. This is the essential infrastructure that can quickly provide a visible and measurable benefit. However, it is not just about engineering the right width and length of footpaths, but its appropriateness, relevance to demand and quality” 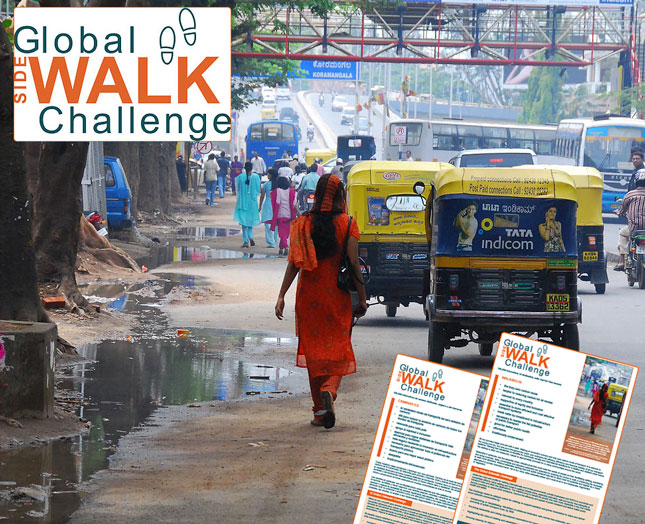 “In addition to better footpaths, we have seen many cities invest in Wayfinding as a visible support for people walking,” claims Walker, “However, I do worry when I look at the world’s city wayfinding systems, that some Mayors seem to want one only to keep up with the competition, hoping they can get away with installing a few signs rather than building a map and responsive system.” 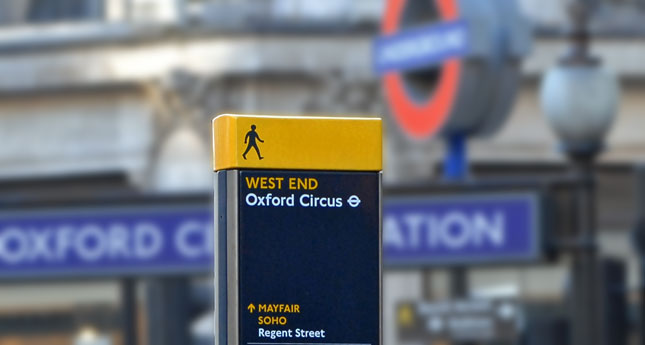 “London didn’t just do walking by erecting a lot of blue signs with yellow 3D buildings. They researched people’s travel choices and, by asking a different set of questions from the usual, discovered that as many as 42% of people were confused when coming out of the Underground. The average mental map of London was limited to 10 minutes from places people knew well, such as home and work. This proved a great opportunity for improvement.”

“Famously, many short journeys on the public transport network were proven to be quicker by walking. It was realised that a wayfinding system could help improve the efficiency of the entire network, if it were designed to improve confidence as well as give supportive directions. City Wayfinding systems should respond to understanding local needs in this way, and therefore require local research and an iterative process, not just signs.”

The next Walk21 conference is being hosted by the City of Rotterdam in October 2019. According to Walker:

“Rotterdam was chosen because the city has spent ten years investing in ‘The City Lounge’, encouraging people into their public realm, then encouraging them to stay and enjoy it. This has resulted in a really good city centre, and the challenge now is to translate this to the rest of the city. Spatial Equity needs to make sure walkability is not just for city centres, but the neighbourhoods where people live. After all, this is where we start and finish at least one journey every day!”