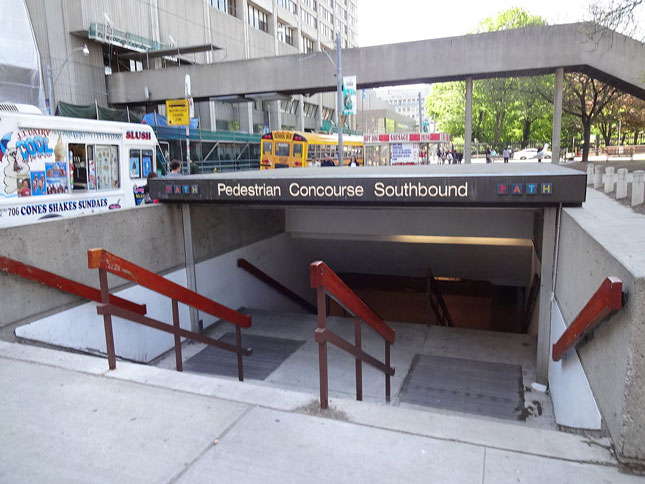 I was privileged last week to meet spokespersons for visually and mobility impaired groups in Toronto, Canada. We were gathered for a stakeholder workshop to understand how City of Toronto’s TO360 wayfinding system could best serve accessibility needs.

When I flew in the previous day and walked from the tram to my accommodation, I found myself irritated by the state of the sidewalks as the uneven surface interfered with my rolling suitcase. As I made my way downtown I closed my eyes and took in the noises: the bustle and turmoil of moving pedestrians, the disorientating sounds of cars passing in all directions. There seemed to be an intimidating number of intersections to cross on my way to the town hall. ‘Where would a wheelchair user cross?’ I thought to myself, as I scanned the street for the best curb ramp.

The workshops taught me that navigating the city can be a case of overcoming fear. Someone who is visually impaired may fear the lack of distinct, continuous and tactile paths at various stages of their journey. One who is mobility impaired may fear the presence of steep inclines and impassable kerb stones along their route. These fears can inhibit many from attempting a trip in the first place. Contrary to popular belief, most visually impaired people are not totally blind, but experience varying degrees of seeing difficulty. This means, for example, that wayfinding signage could actually be useful, but would be difficult to find in the first place, and therefore must be positioned according to a set of consistent rules.

Sounds are highly important for visually impaired people. Smartphone apps that rely on communicating directions through headphones can conversely impede the hearing of background noise. These environmental sounds are essential for anyone (sighted or not) in building up a picture of what is happening nearby.

I have always preferred to look at a map before heading off in the direction recommended by my car’s satnav. Visually and mobility impaired people, who are about to embark on a journey I would find terrifying, also prefer to plan their complete journey from home before listening to specific ‘turn left at the next junction’ commands from a smartphone app. I learned that it is very common to carefully consider every turn and every intersection, choosing the safest and memorising every step of the way.

In order to plan a journey online a joined-up, seamless pedestrian routing network is required which would be able to drill down in detail to show which building entrance has an accessibility ramp, and possibly even guide the user seamlessly through the building.

There are an increasing number of accessibility wayfinding aids being developed to help visually and mobility impaired people. They can be broadly defined in three groups:

Navigational smartphone apps describe routing based on accessible options. These help visually impaired users by describing the route audibly through a headset. The user is guided along the route in real time with clear directions the moment a change of direction is required.

Beacon guidance systems are placed at key decision points, such as bus stops or intersections. These devices communicate with a user’s smartphone app as they move through the area. This has the advantage of confirming the position of the user, and can be used underground, where a mobile signal is unavailable.

Visually impaired people can use high tech glasses with a tiny camera mounted between the lenses. A smartphone app then connects with a live agent, who can see the camera view and describe the scene to the user.

A wayfinding database such as Toronto TO360’s map asset is carefully crafted from multiple data sources. This is to obtain the most current and detailed information for pedestrian wayfinding prioritiy layers, including footpaths, areas of public realm and transit interchanges. Where reliable data is not available, field surveys are used to improve detail and accuracy.

The basemap is designed to promote walking (or cycling) as a method of transportation, encouraging exploration of new areas and extending the distances people are prepared to walk. This is done by creating a hierarchy of information, from an overview of area and neighbourhood names, down to rich local detail displaying walking route details and showing what will be encountered on the way.

Route planning adds another dimension, and requires a joined-up network of walking routes with links to accessibility aids, barriers and obstructions.

A city wayfinding database should therefore be carefully planned so as not to exclude certain users. It should be future proofed in terms of adding data layers at a later date as new technology becomes available. A complete wayfinding system should be more than just a network of fixed signs. Above all, a maintenance strategy for both the map database and physical signs will ensure that the mapping asset increases in value over time.