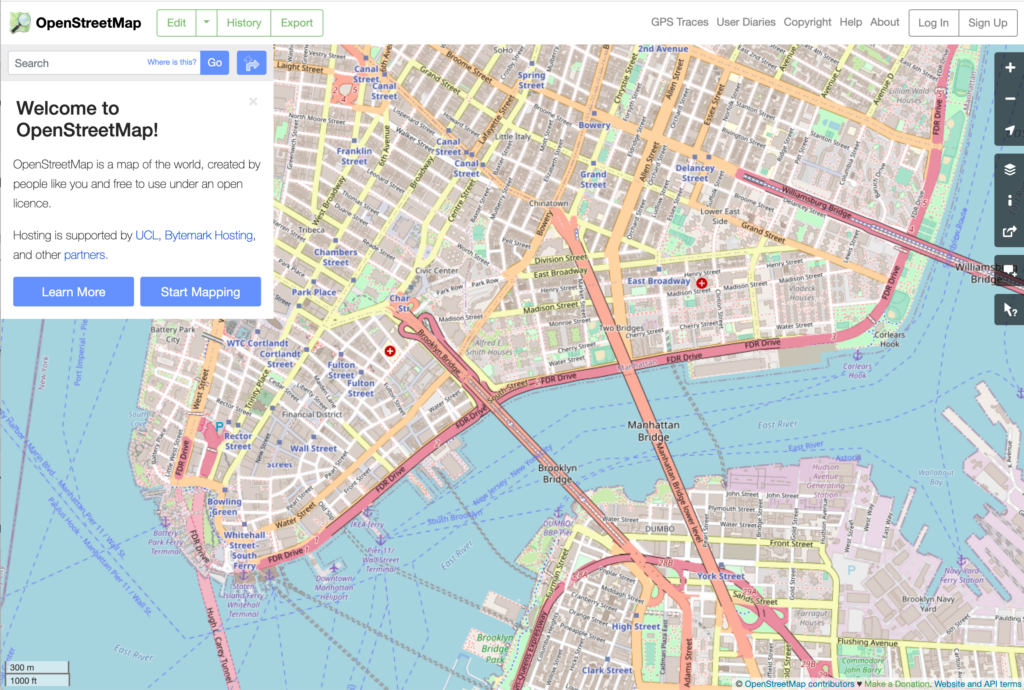 OpenStreetMap (OSM) is created by over three million licensed contributors. Besides the stereotype hobby cartographers digitising their local area from the bedroom, multi-national commercial organisations like Apple, Microsoft and Facebook are contributing to increase the level of quality and coverage.

At T-Kartor we have developed city wayfinding systems based on both city datasets (Legible London; WalkNYC; Toronto TO 360) and royalty-free sources, including OSM (Interconnect West Midlands; NTA Ireland). We asked our technical lead, Matthew Archer, to explain some of the differences.

”Cities usually have GIS data or a license to use publicly financed source data. Despite this, many of our customers are interested in building a royalty-free wayfinding basemap. This can future-proof their system by enabling city maps to be freely distributed, including digitally and commercially. For this reason OSM is worth consideration.”

A look into the separate parts of the basemap will explain how we evaluate source data for the purpose of wayfinding.

The first stage of building up a wayfinding basemap is to create a detailed topographic base defining land use: building, road, footpath, green areas or water. 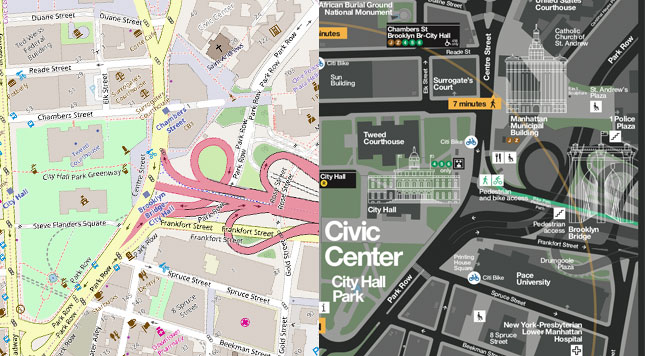 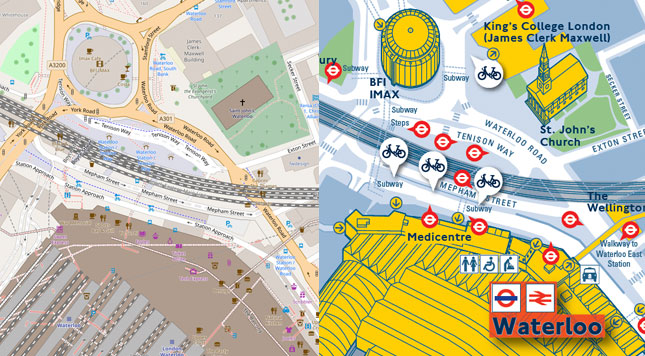 Waterloo Station, London, is complex due to multiple entrances on many levels. OSM data (left) and the Legible London basemap (right).

Legible topography in complex pedestrian environments is essential for pedestrian wayfinding. The map should aid decisions about the best way around obstructions or how to find access points. In the examples above, busy road junctions, barriers to walking and multiple levels make these areas difficult and dangerous on foot.

Where a smaller scale, more generalised result is acceptable, for example this map of Dublin for NTA Ireland, OSM is satisfactory. OSM provides a much lower cost mapping option which can be rolled out over larger areas for regional transport information. 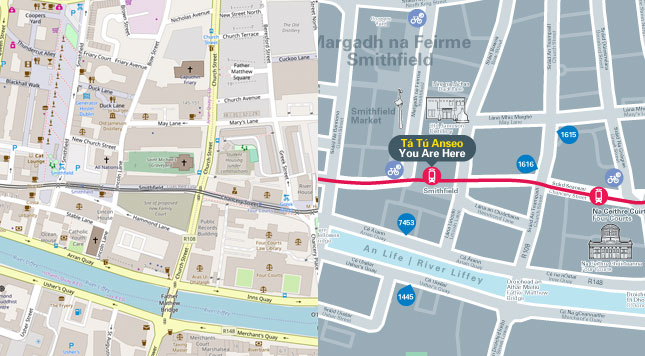 Once the topographic layers are complete we curate the content, or named features adding interest and memorable landmarks to the map. An editorial selection process involving knowledgable local stakeholders decides the most relevant content.

Having said that, OSM is a very helpful supplementary source of data. Cycle infrastructure data, for example, is hard to find as the trend to prioritise cycling in cities is fairly recent. OSM data can help here, being typically generated by enthusiasts, and therefore well surveyed.

Symbology layers showing transport information are central to a city wayfinding system, which aims to integrate walking and cycling with public transport journeys. Public transport departments are usually a key stakeholder, if not the owner, of the wayfinding system. As such, this data is sourced directly from the relative departments and rigorously maintained. Compared to this level of up-datedness and accuracy, OSM has little value to add.

An interesting application of OSM source data could be the development of mobile digital wayfinding basemaps. The small screen area favours small scale, generalised mapping, mitigating some of the detail issues mentioned in this article. In addition, digital maps are created and labelled ‘on-the-fly’ so crafting the position of names and icons is of less value. The resulting basemap would be royalty-free which avoids many problems for digital wayfinding. 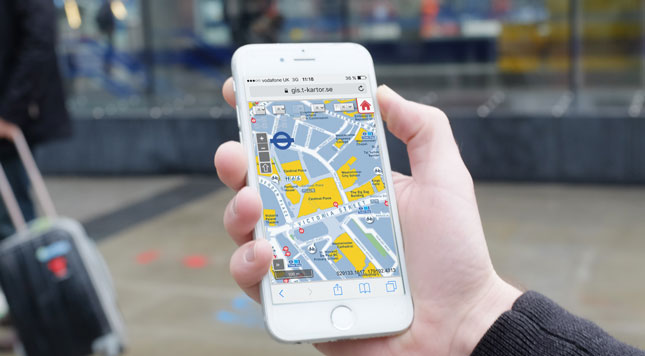 As OSM quality and consistency improves it is becoming a more reliable source of data, requiring less checking and editing. This will make OSM more interesting for cities wishing to create and distribute map products based on their unique content and identity.